I have been turning up to work at a lot of new build properties that seem to have gone, in my opinion, overboard with their door security. Normally to achieve a TS007 you are required to have either a two star handle combined with a one star cylinder or a standalone three star lock cylinder. 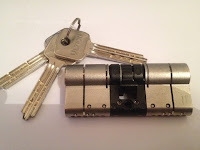 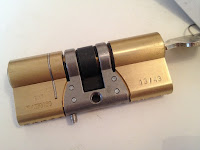 What I am actually seeing working as a locksmith in the West Midlands is a lot of homes with three star cylinders which are then combined with the PAS24 two star handles. This is great news when it comes to preventing a lock snapping attack on a upvc door, however from the locksmiths point of view such a setup can be viewed as a worst nightmare during a failed multipoint lock scenario. Luckily for me I have yet to encounter the worst case scenario working as a local locksmith in cannock

This raises the question: Who exactly are we trying to keep out?
I feel such massive improvements in door security are making the locksmiths life much harder than that of the career criminal who will still opt for a brick through a large pane of glass rather than messing around with door locks. Of course it will prevent many an attempted lock snapping burglary but I think that most one star cylinders or a security handle would manage this.

What are your thoughts? Have you encountered the all singing and dancing setup yet? It's only a matter of time and it's going to be a real stinker of a job...